Try to picture the scene. All around you is just desolate scrubland. You don’t have to travel far to witness the ravages of the wars that tore through this area for three decades (1965 – 1992): you see it in fire-blackened and bombed-out buildings abandoned by businesses that have never returned. Immense baobab trees, with a girth equal to the size of the common unfired clay brick dwellings, populate the landscape. A snake peers out of the dashboard opening (venomous, they said), but thankfully the lions stay in the forest. Living off the land, families dwell closely together, with the house for the firstborn built adjacent to the parents’ home; and with father teaching his sons his own trade, – say, mat-weaving – as countless generations before have done, seemingly. 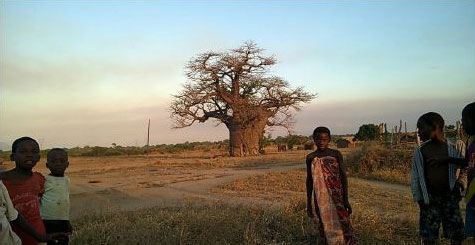 Disconcerting at first to see the womenfolk bypassed in the distribution of all reading materials; but then you discover that only 3 out of the sixty plus women are literate – another by-product of the wars, aided by cultural factors. However, there is a school 15 minutes’ drive away along the dirt-track roads offering a glimmer of hope for the rising generation. Only the resourceful find work: one man has a corn-milling business driven by an old Toyota engine salvaged from the wreckage of a nearby truck lurking in the undergrowth. The employment of others has been terminated by illness. Women turn maize into nsima (the dietary staple here, almost devoid of nutritional value), cycle one and a half hours to market to buy and sell home-grown fruit and vegetables, fill the yellow pails at the hand-pump, and wash the all-pervasive dust from clothes; while the menfolk build their own mud huts and tend to the livestock of pigs, goats, chicken and pigeons.

Suddenly the cry of ‘Murungu!’ rings out. A white man has arrived! For a moment, the mass of tied together plastic bags that have been compressed to form a mis-shapen football is set aside and children throng the vehicle with their spontaneous welcome songs. Song characterises the gatherings of these people. Life is desperate, but they have nothing but praise for God. The youth choir is impressive in controlled power, each voice in unison, rich in tone. For musical instruments, tins filled with grain tossed rapidly back and forth from hand to hand are all that’s required to drive the rhythm (don’t worry, that was not in-church). We are only 40 minutes from the Malawian southern border and here, in this Portuguese-speaking country, we find most are speaking Chichewa in the villages.

Moses Beka and son Joseph, of the Church of God in Chilomoni, have been our guides. Moses’ parents were raised in this village of Mandua. For 20 years, ever since Churches of God were planted in Malawi, his mind had been set to share the news ‘back home.’ He has repeatedly visited this village for 12 years, encouraged to plough this lone furrow by Bernard French and Eric Sampou. Today, he is a happy man. There is now a Church of God in his parents’ village. He has kept his word. 120 interviews were conducted, with 26baptisms down by the Shire River where the dugout canoes ply the crossing and the women wash the clothes. For some it was a challenge to count to seven, but the evidence of having learnt ‘the seven steps’ was convincingly clear and resonated in their individual testimonies time and time again. They had ‘received the word,’ … ‘been baptised,’ … their desire was to keep ‘the apostles’ teaching,’ … and above all to participate in ‘the breaking of the bread.’

It should be once a week, they told us – every other group break bread once a year in this whole Mutarara district and in Zambesi province. Well, they finally did it for the first time on Lord’s Day 17 June with 113 persons on the roll of the brand-new, but long-awaited, Assembly! Their ongoing care has been committed to Malawian, Nigerian, Canadian and UK brothers via two freshly- appointed local deacons: Silva and Ramim.