Crusades in the Philippines

I think my first taste of a ‘Krusada’ was in Dumalag, a squatter district of Davao City where the ramshackle houses are set on stilts and built out over the waters of Davao Gulf to avoid land rent. Previously, I’d wended my way to our rented mission house through dark labyrinthine alleyways, which seemed to recall my visualization of Dickensian London streets. Even at 9 pm in a crowded room with a single bulb and fan, the air was hot, heavy and humid. Such a relief when a gentle sea breeze entered through the louvre windows, bringing the salt smell and gentle rhythmic sounds of the Pacific Ocean some twenty feet below. It was there I remember being captivated as a brother picked up a battered guitar and sang so meaningfully, “I’m just a sinner saved by grace.” We later moved out to the local basketball court and I had my first taste of a Gospel Rally filipino-style. 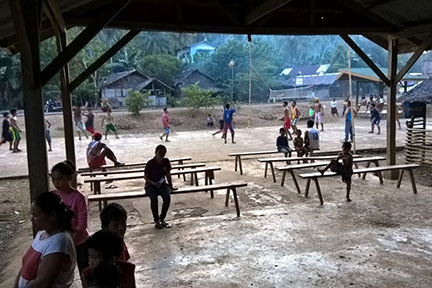 The typical procedure is we proceed to a central basketball court – which every primitive barrio here is built around. Electricity is generally available at this point. During the day, a battered loudspeaker has boomed out recorded trailers for the evening’s event. 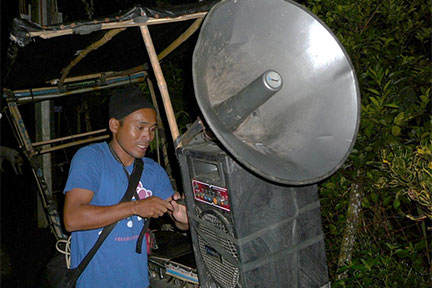 We commence as darkness promptly falls at 6 pm, allowing the image on the screen to become easily visible from the old £20 eBay projector and second-user laptop. 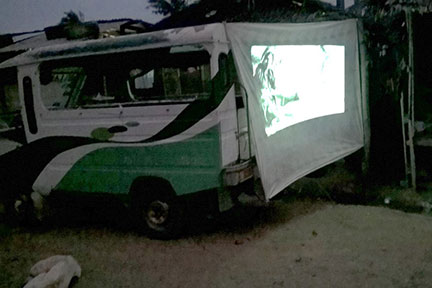 A brother is nominated to open in prayer. A local official known as the ‘barangay captain’ may give a welcome address and soon Geralde commences the now standard edited excerpt of the Youtube-downloaded ‘Jesus’ film in the local Bisaya dialect. This draws a crowd – I’ve seen as many as 200-plus of all ages. Life in the village stops. Some distractions continue from through-traffic on motor-bikes, but overall attention is quite rapt. You can sense God at work.

Geralde gives a little commentary and introduces the singers and musicians for the night. Some believers in the crowd join in. Then the preacher takes up the advertised crusade text. As the closing appeal is given, there is quietness, then movement. Within a couple of minutes, it has been known for 40-60 to gather in front of the stage. They look to be in earnest. They are led in an antiphonal translated sinner’s prayer with pauses which they each audibly fill in. A loud Amen, and time for greetings! Another never-to-be-forgotten night under the stars. We might be high on the hills, but there is still no breath of wind. After a two-hour program the preacher’s shirt is limp and damp, often with something crawling around under it. Afterwards the rally team devour a meal – the chicken which had been running around at the beginning of the evening’s rally. Then the rain comes, something I dread because I’m thinking of the descending muddy mountain tracks we have to negotiate. Thirteen of us, with all the PA, guitars, keyboards, laptop, projector and a dozen stacking plastic chairs, clamber aboard two motorbikes and set off in pitch darkness. One gradient has by now become a mudslide. From my perch, I can see the bike in front lose traction; then we too were over as our driver dropped the bike. It was nothing worse than being cast onto a muddy hillside at slow speed, providentially overruled away from any overhang. Safely downhill, the local youth said it was their worst ever journey!

Amid brown-outs and monsoon rains we had the joy of leading Marcela Puyos to Christ at the conclusion of our first night’s ‘Crusade’ up in the mountain trails way above Nabunturan where the aerial bugs were the size of small helicopters (at least the remote-controlled model ones)! I don’t think I’ve seen bugs so big before. Whenever they hit power lines and fell stunned out of the sky, the youngest village children would pounce on them and lasso them with string and amuse themselves by swinging them around their heads. Marcela had appeared genuinely to give her life to Christ. Were others hindered in the circumstances? Was this ‘brown-out’ another of Satan’s schemes? Or just another everyday occurrence? Still – one sinner from death to life is miracle enough to be content with during an evening’s excursion. Follow-up is done, church youth have been circulating throughout the audience with ‘Census Evangelism Survey’ forms capturing details from interested persons, and some of those who respond are led into the Churches of God – like a young man who was saved at one of our Gospel Crusades led by Geralde Magusara in June 2014 and who had been followed up into Fellowship in November 2014 by David Woods. 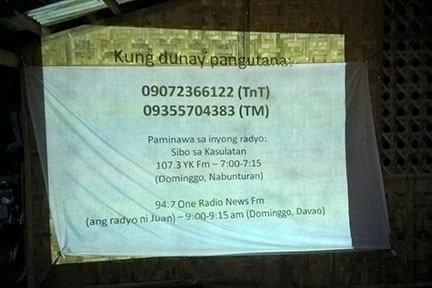 From where I was seated at the Breaking of the Bread months later, I could see his Bible – which we’d supplied – now beautifully annotated (he’s been through the New Testament twice already), and his contribution in thanksgiving displayed skilful thought processes in working with Scripture. His character, and that of his wife, is delightful, complementing his gift and enhancing his potential usefulness. To think, some six months ago he was in total ignorance of the Bible, for being a Catholic priest’s assistant at that time, he was strictly forbidden contact with God’s Word. He may or may not be a plough-boy, but he surely knows far more than his former priest now!