There are some bright and attractive steam locomotives near my home. In fine working order, they bring pleasure to many; yet they are almost unrecognizable from the dull, unworkable things they once were. The great change occurred through the patient work of the restorer. At Calvary, the great restorer of souls demonstrated His infinite love for both His Father and ourselves when He fulfilled His commitment made in eternity and revealed in Messianic Psalm, “Though I have stolen nothing, I still must restore it” (Psalm 69:4 NKJV). And that love, patience and commitment to restoration are undiminished today, as He transforms the life of many a failing Christian. We see this so vividly illustrated in His gracious restoration of the apostle Peter.

Having considered his sad failure in the previous chapter, we now trace the process of his complete restoration. And we do so mindful of the fact that though we are not called to such prominent service as Peter’s, we are called to serve the same gracious Lord. Conscious of failure ourselves, we find his experience a great encouragement. The Lord Himself lovingly takes the initiative in such restoration, clearly demonstrated by three aspects of His restoring of Peter.

Firstly, He prayed for it: “I have prayed for you that your faith may not fail” (Luke 22:32). It is a great comfort to struggling Christians today to know that this same compassionate Friend “always lives to make intercession for them” (Hebrews 7:25). And those who would be much used by their Lord will, like Peter, he prime targets of Satan. They will need the prayers of others too.

Secondly, He promised it: “when you have turned again, strengthen your brothers” (Luke 22:32). This does not mean that restoration is ever automatic; it is only as God graciously grants repentance (2 Timothy 2:25). However, it is fitting that Peter himself tells us “The Lord is … patient toward you … that all should reach repentance” (2 Peter 3:9).

Thirdly, He prompted it: “The Lord turned (Greek: strepho) and looked at Peter” (Luke 22:61), and this started the process by which he became converted (Greek: epistrepho – turned about). Yes, “‘Tis the look that melted Peter”, filling his eyes with tears and his

heart with sorrow. But thankfully, then as now, “godly grief produces … repentance” (2 Corinthians 7:10).

We try to imagine poor Peter’s awful state that weekend. Broken-hearted that his dearest Friend, the Messiah, had been brutally slain, he also carried a heavy burden of guilt; he had let his Lord down so badly, even to the extent of lying and cursing in the process. No wonder he wept bitterly! “I’m not worthy of Him, I’m finished” he might have thought. But “Peter remembered the saying of the Lord” (Luke 22:61) who so accurately predicted his failure, and on reflection this surely gave him hope; for it reinforced the fact that the Lord had chosen him even though He knew the worst about him! Perhaps too, in his grief he clung to the Lord’s promise regarding his conversion. So today in our darkest hours of failure and self-doubt, when Satan would smash our faith, we can cling to the rock of Christ’s promises until the storm has passed.

On the glorious resurrection morning restoring grace was already working in Peter, for although he had wept bitterly he had not remained isolated, wallowing in destructive self-pity. He was in fact with John, and characteristically he was the first apostle to enter tile empty tomb, eager to know the truth. The stupendous news of Christ’s resurrection would have been greeted with mixed feelings by Peter. “How shall I meet those eyes?” would sum up how he felt, no doubt. However, there was real encouragement for him in the heavenly message to the women that his Lord was thinking specially of him, for the angel said, “Go, tell his disciples and Peter that he is going before you to Galilee. There you will see him, just as he told you” (Mark 16:7). And indeed among the apostles the risen Lord gave priority to Peter: “He appeared to Cephas (Peter); then to the twelve” (1 Corinthians 15:5). This is confirmed by the message of the disciples late on the resurrection day, “The Lord has risen indeed, and has appeared to Simon!” (Luke 24:34).

Yes, the Lord was going to demonstrate His tremendous grace by restoring the one who had publicly failed Him, and transform him into an outstanding and courageous leader of His people. So an early face-to-face alone with Peter was essential. We are not told what was said at that crucial interview, but we may be sure it was heart-to-heart, when true repentance and complete and loving forgiveness were fully expressed. Some time later, the first apostle into the empty tomb was first into the water to meet the Lord on the beach

that morning after the fruitless fishing trip. Peter’s eagerness to be near his risen Lord was a sure sign that communion had been restored.

Having lovingly assured Peter of his forgiveness, the Lord was ready to confront him with the renewed challenge of true discipleship. Three years earlier Peter had been irresistibly drawn by the Man who said, “Follow Me”, and after all that had happened since, the last recorded words of the risen Christ to Peter personally, spoken that morning by the lake, were still, “Follow Me” (John 21:19). From first to last, and at every stage, the Christian’s life should be a personal response to Christ, with a genuine desire to follow His teaching, His example, and indeed the Man Himself in personal devotion and communion. Any so-called “advancement” in Christian service which takes one away from such devotion to the Lord is not true progress. This was a vital lesson for Peter who was to shoulder the responsibility of leadership among God’s New Covenant people. And it is a crucial lesson for any who would be leaders among God’s people today.

But before Peter’s brethren could be expected to accept such leadership from one who had seriously failed by a three-fold denial of his Lord, Peter needed to face both the challenge and the opportunity of demonstrating his genuine restoration by a corresponding three-fold declaration of his love for the Lord in the presence of such brethren. And furthermore, like us today, Peter needed to know what “follow Me” means in practice. These issues were faced that morning by the lake, and the earnest conversation is recorded for us in John 21. We understand that the writer used two different Greek words, both translated love, to convey just what was said. In seeking to understand the conversation better, an amplification along the following lines might be of some help.

JESUS: Simon … do you truly love Me with all your being, more than these do?

PETER: Yes, Lord. You know that I have a loving affection for You.

(Again, the same question received the same answer, then:)

JESUS: Tend My sheep. (And finally:) Simon, do you really and truly have such a loving affection for Me?

(Peter, who now mistrusted his old self-confidence, didn’t feel worthy to claim the higher agape love of his entire being, but when Jesus challenged even his affection for him, this hurt. He was sure his Lord knew his love, and just how strong or weak it would prove to be).

PETER: Lord, You know all things. You know I have this loving affection for You.

Like Peter, we do not feel we can boast of our love either; nevertheless, we do love our Lord and we want to follow Him more closely. And as the Lord impressed upon Peter that day, such following in loving response to Christ entails caring about others. This is a challenge to us all, especially to those who, like Peter, are called to be shepherds among the Lord’s people. True commitment means tender caring.

Peter and the other apostles continued learning from the Lord until His ascension. Then in both waiting for and witnessing by the Holy Spirit, Peter’s restoration to spiritual leadership was clearly demonstrated. For, less than two months earlier in a Jerusalem courtyard, “Simon Peter was standing and warming himself’ (John 18:25), yet failed hopelessly to stand up for his Master. But during the ten days’ wait for the Holy Spirit, “Peter stood up among the brothers” (Acts 1:15) and led the one hundred and twenty in seeking a successor to Judas. Then at Pentecost, filled with the Holy Spirit and facing thousands, “Peter standing with the eleven … lifted his voice and addressed them …” (Acts 2:14), and we know the marvellous result – thousands were saved when restored Peter began to take his stand for Christ.

In later life, we can trace his faithful, fruitful, and fearless progress; a glorious testimony to the restorer of souls who lovingly renewed the invitation, “Follow Me”. But here we marvel at the restoring grace which made Peter a more effective disciple than ever he had been before. Such recovery to fruitful service, which is to the glory of God and the blessing of others was, we recall, in the heart of repentant David when he pleaded, “Restore to me the joy of your salvation … then I will teach transgressors your ways, and

sinners will return to you.” (Psalm 51:12,13). The vital sequence implied in this psalm is repentance, restoration, revival, and results. We have seen this so clearly in Peter’s experience.

So those of us who are conscious of failure and deeply desire to be restored to a Spirit-filled life, well-pleasing to the Lord, are encouraged by God’s gracious promise: “I will restore to you the years that the swarming locust has eaten” (Joel 2:25). May it be so in many lives to His glory.

“Will You restore?
Then Lord in faith
Before You feet I bow,
Confess to You my shame and loss.
Fulfil Your promise now,
Thus changed and sanctified, made meet
To do the humblest task;
To be well pleasing in Your sight
My Lord, is all I ask.” 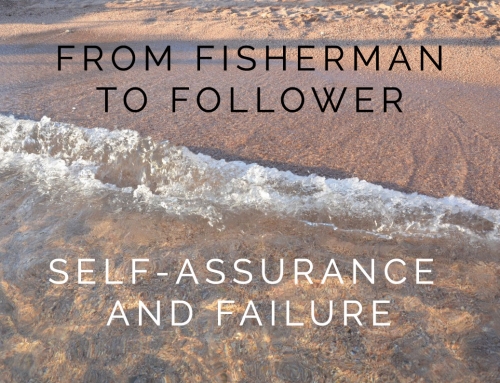 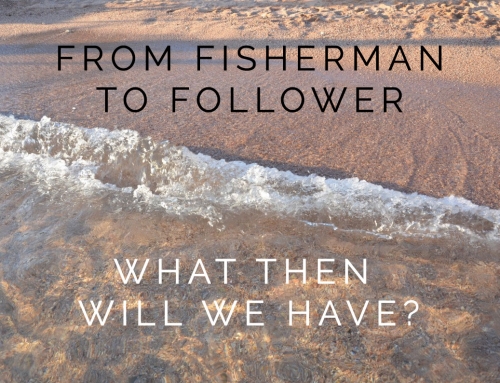 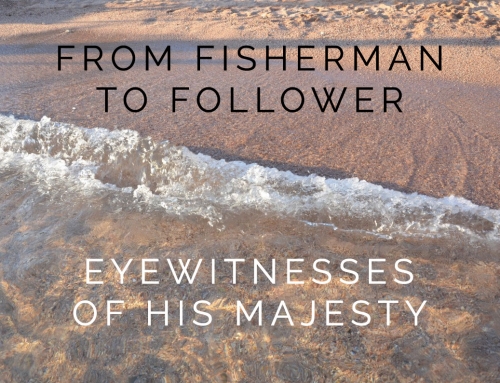 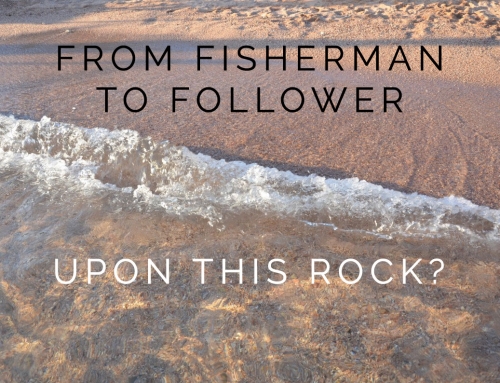 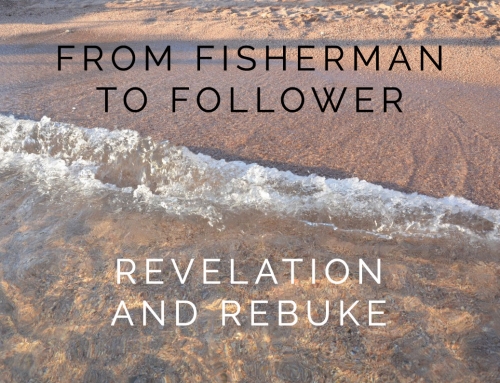