Manchester was reeling in the aftermath of the terrorist attack on 22 May 2017 at the Manchester Arena. Young and old lost their lives, and many people suffered life-altering injuries. Anger and fear gripped the city.

In late 2016 the Church of God in Manchester had planned two weeks of activity for June 2017, to share the gospel with residents living near the church building and through on-street engagement in local shopping precincts. Greater Manchester is a mixed, cosmopolitan community. The plans were all in place, including going door-to-door to speak with people, in the hope of having opportunity to speak with them about Jesus the Saviour. And then the terrorist attack happened. How should we continue now, being aware of local tensions and the nervousness with which some might receive a knock at their door?

We prayed over the matter and sensed that it was right to thoughtfully continue with our original plans. It would be wise, though, to have a sympathetic and considerate way of introducing ourselves to those we approached. So we crafted a short leaflet incorporating the logo that had become the symbol of people’s response to the tragedy, so as to make an immediate connection with people. 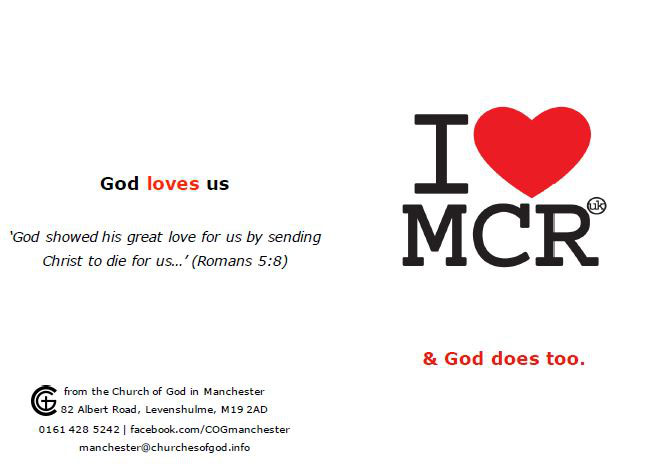 This meant we were generously welcomed by those we shared our leaflets with, and enabled us to begin conversations. In fact, the response was better than we might have normally expected had we used ‘standard’ gospel leaflets. Muslim neighbours expressed their appreciation at our making connections with them in such delicate times; others were thankful for someone to talk to about what had happened on 22 May at the Arena. The identifiable logo meant an instant connection, and we’re thankful for the opportunities that followed.

Two thousand of the leaflets were distributed over the two weeks, and more were printed to enable those in the church to continue to use the leaflets in their private connections. We pray on that those who read the gospel contained within will come to trust the Saviour. 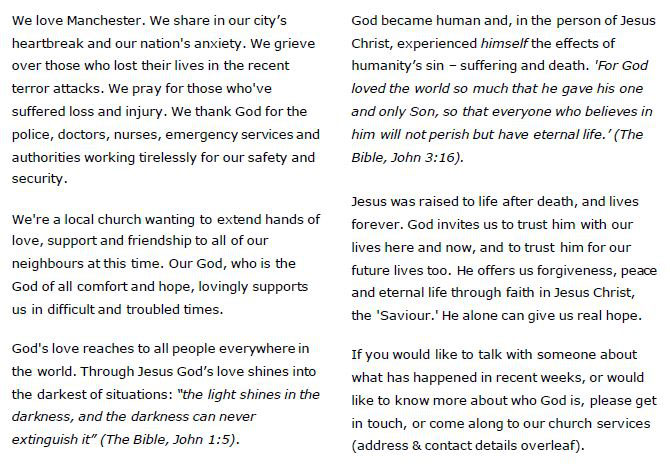